Previously, the IRS posted an updated Form 4506-T (version June 2019) which removed Line 5a, which covers mailing tax transcripts to third parties, and replaced the “Caution” statement after Line 5 with the following “Note: Effective July 2019, the IRS will mail tax transcript requests only to your address of record. See What’s New under Future Developments on Page 2 for additional information.” This updated version of Form 4506-T could no longer be utilized for third party tax transcript requests, but the IRS continued to accept the prior March 2019 version which does allow for third party requests. 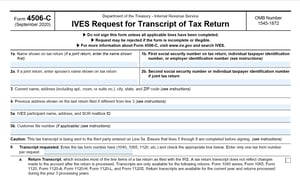 Starting March 1, 2021, only Form 4506-C will be accepted for use by authorized Income Verification Express Service (IVES) Participants to order tax transcripts records electronically. Line 5a of the new form allows for participating IVES Participants information to be entered.

DocMagic postponed changing to Form 4506-T (version June 2019) and has continued to provide the March 2019 version of the form so that it could continue to be used by all customers and our IVES partners.

DocMagic will make the new Form 4506-C (DocMagic Form ID: 4506C.MSC) available upon request starting Nov. 19, 2020. Currently, DocMagic is working on implementation with IVES partners and awaiting guideline updates to be made by agencies and the secondary market to allow use of the new form. DocMagic will announce the default addition of Form 4506-C to initial and closing packages in the coming weeks.

Should you have any questions, please contact DocMagic’s Compliance Department at compliance@docmagic.com.