The Real Impact of Integrated Disclosures 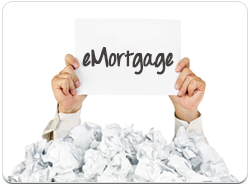 What can the industry expect when the CFPB’s final rule and new forms take effect next year?

When federal regulators change the rules governing the requirements for originating a mortgage loan, it can mean pain for both the industry and the consumers it serves. But this time, the move to an integrated disclosure may surprise you and translate into an unexpected side benefit to all parties—that benefit is the eMortgage.

For almost a decade and a half, proponents of all-electronic lending have urged lenders to take the paper out of the process in favor of fully electronic mortgage origination. Despite its significant benefits, eMortgage adoption gave way to the critical mass of lenders unwilling to abandon their legacy systems and paper-intensive processes.

Meanwhile, behind the scenes, lenders’ partners have been implementing systems that allow them to complete more of their loan origination workflow without stopping to paper out. The reality is that a fair amount of lenders have, in fact, been operating fundamentally without paper up until the loan closing, when they print all of the forms for their borrowers’ signatures.

We all know regulation drives change, and the new integrated disclosures lenders will begin using next year provide all the incentive needed to let go of the paper once and for all. Here’s why.

Complying with New Disclosure Rules
It’s not just the documents that are changing next year; it’s also how the lender is expected to interact with borrowers. There are essentially four elements of consideration:

For most lenders, their document preparation partners will ensure the right data is mapped to the right fields in the proper format. They can also assist with making sure the initial and final disclosures are accurate and within acceptable tolerance thresholds. Most lenders will see little change in their operations for this reason, at least initially.

Speeding up Closings with Electronic Delivery
It’s the delivery requirements and the resulting benefits of using electronic delivery that will direct lenders to make changes to their current operating processes. The initial loan estimate must be delivered or placed in the mail within three days of application, which should sound familiar to lenders. In addition, the loan cannot close sooner than seven days after the loan estimate is delivered or mailed. These rules are similar, but not identical to current requirements outlined by the Truth-in Lending Act (TILA) and the Real Estate Settlement Procedures Act (RESPA).

If the loan estimate isn't delivered in person, it is considered “received” by the consumer three days after it is placed in the mail. However, the new rule has an interpretation that is specific to electronic delivery. It provides that the creditor may, alternatively, rely on evidence that the consumer received the loan estimate disclosure sooner by means of an electronic delivery method.

This concession is significant. The lender could send the forms to the post office and then wait the three days stipulated in the rule. But that means the lender cannot begin charging fees until that three-day period is over. The rules are specific and state that a creditor may not impose a fee, other than a credit report fee, before the consumer has received the disclosure and indicated intent to proceed.

If the lender sends the initial loan estimate disclosure electronically and uses a system that can verify it was received, the lender can move forward with the loan more quickly, perhaps up to three days sooner. This is good for the lender, but it’s also good for the borrower, who is just as eager to get the process underway.

The closing disclosure is somewhat different and is more likely to give lenders trouble. Like the initial loan estimate disclosure, timing is dependent upon when the borrower receives the notification. In this case, the loan closing cannot be scheduled until three business days after the borrower has received the closing disclosure form. If mailed, the presumption is that receipt occurs three business days later, which puts the closing at least six days after mailing.

Again, if the documents are delivered electronically, the lender may proceed to schedule the closing the moment there is evidence the borrower received the electronic form. As with electronic delivery of the initial disclosure form, this can shave up to three days off the process. The lender could send the documents by courier and eliminate the three-day waiting period with in-person delivery, but only at significant additional expense.

The Real ‘Compliance’ Impact of Disclosure Changes
RESPA and TILA have always had the same purpose they have today: to inform consumers about their loans and the associated costs. In that respect, the keys to compliance haven’t changed. The goal remains to be as accurate as possible, as early as possible so that the consumer can make an informed decision. Get this right and the consumer won’t be unpleasantly surprised later in the process.

What has changed over the years is the meaning of “accurate.” In this new rule, additional categories of charges have been moved to the zero-tolerance bucket. There is now no margin for error in estimating certain fees, and only a small tolerance for others. Lenders need to implement controls that ensure costs associated with a loan don’t exceed the amount estimated and disclosed to the borrower.

It’s also important to note that regulators are very specific about the information lenders are to communicate to borrowers. The goal is to ensure consumers can easily compare loan estimates from different lenders before selecting a loan, and one of the ways to accomplish this is for the disclosure forms to be standardized. The result is that even the smallest details of the forms have specific rules now, and the rules are complex—hard to understand and hard to explain. Lenders will need to rely on their technology partners for assistance, and they’ll need to provide extensive training for team members who produce these disclosures.

Noncompliance comes with a heavy cost. If charges to the borrower vary more than is permissible, the lender must refund those fees. Additionally, existing annual percentage rate (APR) and finance fee tolerances remain in effect, and curing those errors can be expensive. Finally, noncompliance with the new regulations carries the risk of fines, penalties, and court actions.

But it’s not the financial risks associated with individual cases of noncompliance that should trouble lenders the most. The greatest challenge will be managing team members through the necessary change process. The CFPB has mandated the mortgage industry use technology to take more control over the mortgage closing process. In an April press release, the bureau pointed to four major pain points that a better closing process could aid: (1) giving borrowers more time to review documents, (2) reducing the overwhelming stack of paperwork, (3) making the documents easier to understand, and (4) reducing the number of errors in documentation.

Shifting Toward eMortgages
Ultimately, the real impact of the new integrated disclosures will be a shift on the part of the lending community toward easing the pain in those four areas. Electronic documents will help achieve this end, so more lenders are expected to start using e-docs for more of the mortgage process. The timing requirements stipulated by the new rule will make adoption more attractive to lenders. Some will view the benefits to the consumer as a bonus, and once a lender is sending documents electronically, a fully electronic closing seems much more viable and possible.

Eventually, going fully electronic will be the easiest way to prove to regulators and auditors that every action taken by the lender was compliant. Electronic audit trails have long been used for compliance purposes. It makes sense that lenders will make use of them to defend against future action by regulators.

But the changes don’t end there. There will also be some changes in terms of the roles and relationships lenders have with some of their partners. For instance, the relationship between the mortgage broker and the lender will change because under the new rules, the mortgage broker can provide the borrower with the necessary integrated disclosure forms, which merge and meet the requirements for both TILA and RESPA. In the past, the broker handled RESPA’s Good Faith Estimate (GFE) and the lender was responsible for the Truth-in-Lending statement.

Under the new rule, lenders that accept loan submissions from third-party originators must adjust their processes to ensure a timely, accurate disclosure is provided to the borrower. Of course, the lender is ultimately responsible for compliance.

Ultimately, however, the lender is on the hook for compliance. Lenders need to implement a business process that ensures correct, complete information is available to whichever party prepares the final version of the disclosure and presents it to the borrower. In the end, whoever provides the final disclosure is likely to provide it electronically; it just makes more sense.

CFPB is doing its job as mandated by the Dodd-Frank Act. The bureau has been diligent in responding to questions from the industry and issuing guidance. Ultimately, it’s the industry’s own responsibility to integrate all of the rules, guidance, and questions into daily lending practices and actionable plans. In the case of the new integrated disclosure rules coming next year, it might actually serve to take the industry where many say it should have gone years ago— right to the eMortgage.

--
Tim Anderson is director of eServices for Torrance, California-based DocMagic. He has been a long-time proponent of paperless lending and is a past winner of Mortgage Technology’s Steve Frasier Award. He can be reached at tim@docmagic.com.

As featured by TheMReport, October 2014