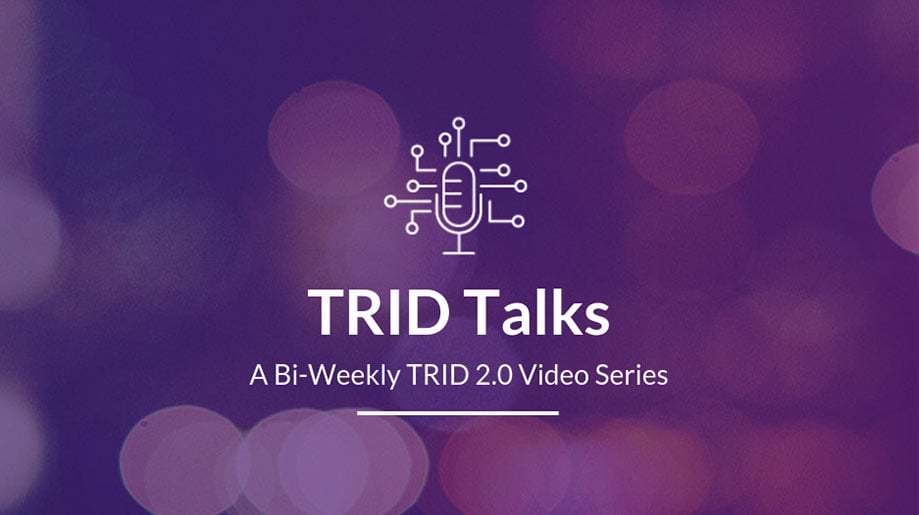 Throughout the month of September Chief Compliance Officer, Gavin Ales, will introduce some of the major changes coming with TRID 2.0 and provide clarification for each topic along with expert commentary on the new regulations, what has changed and what it means to be compliant.

Training and Education Manager, Ron Carillo, will show you how and where to get started testing TRID 2.0 implementation inside DocMagic.

Below, you’ll find the topics for current and upcoming episodes of TRID Talks.

When do you need to comply with the new rules?

Major clarifications that are addressed by TRID 2.0.

Rounding & Truncation on the LE & CD

TRID 2.0 Changes to Rounding and Truncation of the LE & CD

Seller Credits - Did this change?

When Calculating Cash to Close on the Closing Disclosure, if the amount disclosed for seller credits on the last disclosed LE differs from the amount disclosed on the CD, the creditor must include a disclosure referring the borrower to the seller credit amount. Currently, this disclosure would only refer the borrower to page 2 where closing costs paid by seller are itemized. Under the Rule, this disclosure must also refer to the general credit that is disclosed in the Summaries of Transaction. DocMagic has automatically updated the language disclosed in the “Did this change?” section to reflect this change.

Negative prepaid interest and the impact on 'Total Interest Calculations'

The first example of one of these situations would be a rescindable transaction, a re-finance being the most common example where you have persons that are only on title but are not borrowers. In this situation you are required to provide the closing disclosure to those persons.

This helps with some of the confusion where persons, who are non-borrowers, may wonder why they would be listed as a borrower.

Under TRID 2.0, if you have a title only person or a non-borrowing spouse (which is called a non-title spouse here at DocMagic) you would enter those as you have previously.

The other unique situation that is clarified under TRID 2.0 is making a loan to a trust. A trust is an entity that may not otherwise meet the definition of consumer, meaning a natural person.

However, in the original TRID rule there was discussion about how the rule still applies to loans that are made to trusts. In those situations, you would look through the trust to find who will be the beneficiary of the loan, as well as the beneficiary of the trust and that would be the individual(s). According to the consumer protection statute seeking to protect consumers, that would still apply in a loan to a trust.

The one change, based on that analysis, was that the rule indicated the disclosure should be provided to the beneficiaries of the trust (aka the actual consumers who are benefiting from the loan).

However, recognizing the legal relationship of the trust as borrower, the rule clarifies that your disclosure should be made to the trustees as representatives of the trust.

As a DocMagic user these configurations will take care of themselves in the programming. You can continue to enter in transactions as usual.

Under the original rule it was written in a way that limited the number of days to only allow 10-business days between your issue date and the Closing Cost Expiration Date.

This rule seems to unintentionally contradict the original GFE rules from 2010 that state the requirement had always been to be at least 10 days.

To accommodate that change DocMagic has added a configuration option to our system to allow users to indicate the number of days they would like to use for calculating the Closing Cost Expiration Date.

Changes to the Closing Costs Expiration Date after the Initial Disclosure

The next change to the Closing Costs Expiration Date is what happens once the Initial Disclosures are finished and you're now issuing a re-disclosed LE.

DocMagic users don’t need to update their configurations as this is already taken care of in the programming of our form. However, if you are not providing an Intent to Proceed date before, under the original TRID rules, you would want to do that now. If DocMagic has an Intent to Proceed date, it will blank out the Closing Costs Expiration Date. But if there’s no intent to proceed date, the Closing Costs Expiration Date would continue to appear.

Under the original TRID rule the Cash to Close for Subordinate Lien Transactions would show large amounts, amounts that could be somewhat off putting to consumers.

At DocMagic we’ve added a new data point to our model so that we know when to trigger these new rules. DocMagic online will indicate when a transaction is a simultaneous subordinate lien transaction.

Changes made for Inspection and Handling Fees

One of the changes that the CFPB made in TRID 2.0 relates to post-consummation inspection and handling fees and how those are disclosed on the LE and CD. These are fees that would usually be collected during the period of the construction phase, for example, for multiple draws and if there is a draw fee for each, and for inspections that need to take place prior to the lender approving the draws, and there's a fee for that inspector. Those would be examples of post-consummation inspection and handling fees.

Under the original rule says these fees are not disclosed as normal closing costs like every other cost to the loan on the Loan Estimate and Closing Disclosure. Rather, they need to be disclosed to the borrower, but not as closing costs.

Additionally, because these fees are not closing costs, it means that they won't be considered in the Cash to Close that the borrower needs to bring to the closing table.

It typically refers to those costs that are in the origination charges section and in the services you can, borrower did, and cannot, and borrower did not shop for section.

So, where you've got the monthly principle and interest amount, that amount would be based on half of the commitment amount. And then where you see the question, “Can this amount increase after closing?” you’ll see that we're answering, yes.

Principal Reductions for a tolerance cure

A tolerance cure is where a lender has exceeded the legal limit amount that was based on the amount that they originally disclosed on the loan estimate for a charge.

At closing, if the amount exceeds the tolerance for either zero percent or the 10 percent amount, that amount must be cured. The rule requires that certain language appear on the form to indicate that the amount includes or is for amounts that exceed those legal limits.

If there was a tolerance cure you would see it at the bottom of the closing cost details and the general lender credit amount. You would see language about this amount includes X dollars that exceeds legal limits. And then that same language pretty much would also appear in the cash to close table for the total closing cost amount, as well, under the did this change disclosure.

The change requires the ‘did-this-change’ language to be different in the cash to close table when it's a principle reduction for a tolerance cure, DocMagic had to control how when that data was being entered as a tolerance cure.

Under the original TRID rule, if there was a principle reduction, you could simply type that into the summaries of transactions and you could do that with our service of DocMagic online or through your LOS.